Previous
Next
Print
Go to algorithm

The prevalence of milk allergy is increasing and as a result infants are increasingly referred to Dietetic services for advice regarding the avoidance of milk and supplementation with an appropriate alternative formula. On presentation an allergy focused history (Table 3) and presenting symptoms can usually determine if the allergy is an IgE or Non-IgE mediated reaction and this will also determine the appropriate treatment course.

IgE reactions can be severe and (rarely) lead to anaphylaxis therefore the diagnostic techniques of exclusion and reintroduction, where this may induce a severe reaction, are not recommended. IgE allergy should be confirmed by Specific IgE or Skin Prick Test investigations. Repeat monitoring of these investigations should guide appropriate timing for reintroduction. In some cases, where symptoms pose significant risk, reintroduction attempts will require to be carried out in the hospital setting.

Non-IgE mediated allergy cannot be confirmed using the above investigation techniques, therefore diagnosis is confirmed by symptom response to a period of exclusion followed by challenge with cow’s milk. Many Non-IgE milk allergy symptoms are common in infancy and challenge with milk is required to ensure that infants are not following an exclusion diet unnecessarily.

There are several alternative infant formula which have Advisory Committee of Borderline Substances (ACBS) for the treatment of cow’s milk allergy. There is a significant cost difference between Extensively Hydrolysed Formulas (eHFs) and Amino Acid Formulas (AAFs), ensuring appropriate prescription has potential for significant cost savings.

There is evidence to suggest that prolonged avoidance of milk can impact children nutritionally and socially and may lead to long termrestrictive eatingtherefore regular monitoring and timely staged reintroduction of cow’s milk is essential.

The aims of this guideline are:

Evidence base for the treatment of non IgE CMPA

Between 1 to 17.5% 1, 2 of all infants show symptoms suggesting adverse reactions to cows' milk.  However evidence also indicates that following a food challenge, confirmed milk reaction is less than 1%3 .  CMPA in exclusively breast-fed babies is lower (0.5%) compared to formula-fed or mixed fed infants.

The guidelines published by  ESPGHAN 4  Ludman et al5 and Venter et al  6,  on the diagnosis and management of cow’s milk protein allergy in infants (The MAP guideline) have been used as the basis for these guidelines on the management in primary care. https://www.allergyuk.org/health-professionals/mapguideline

Children with the following conditions should be excluded from following this pathway and onward referral made to the appropriate service such as general paediatrics or paediatric dermatology.

Exclusions are infants with:

For Argyll and Bute - Referrals should be sent to the relevant Paediatrician and dietitian - nhsh.dietitiansdirect@nhs.scot

* In North Highland patients with severe reflux should be referred directly to the infant feeding clinic via the Paediatric Dietitians: paediatricdietitians@highland.gov.uk. Referral pathway can be found at: http://intranet.nhsh.scot.nhs.uk/Org/DHS/ChildrensServices/HospitalPaediatrics/Documents/Nutrition/infant feeding clinic/Pathway_for_referral_to_IFDC and IFAC DRAFT2 2018.doc

Consider food allergy in children whose symptoms do not respond adequately to treatment for: Atopic eczema, Gastro-oesophageal reflux disease and chronic gastrointestinal symptoms including constipation

As part of the initial assessment of a non-IgE reaction to cows' milk protein it is important for health care professionals to take an allergy-focused clinical history appropriate for the age of child and presenting symptoms. This history should include the following:

Assessment of severity of symptoms of Non–IgE mediated CMPA

The majority of presentations of Non-IgE CMA are likely to be mild to moderate and most formula fed infants will be successfully treated using EHF. Those with more severe symptoms warrant use of AAF. AAF is significantly more expensive than EHF and should only be used when clinically indicated. Symptoms are shown in the table below. 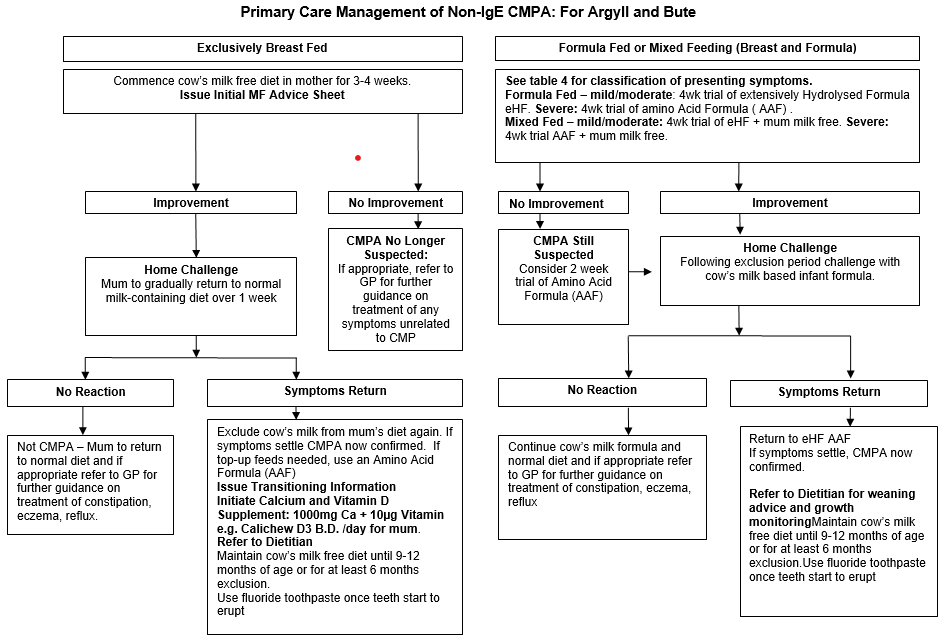 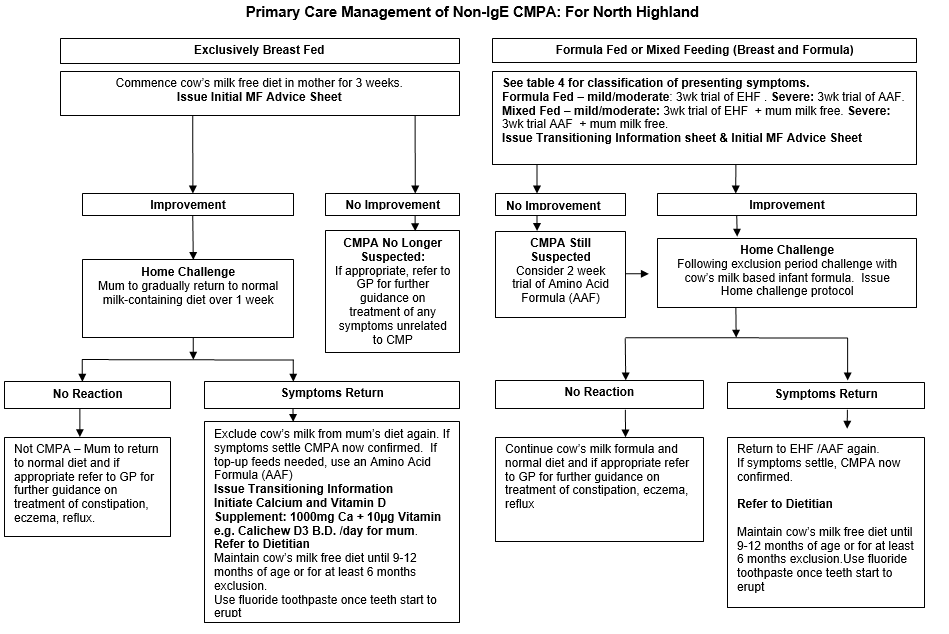 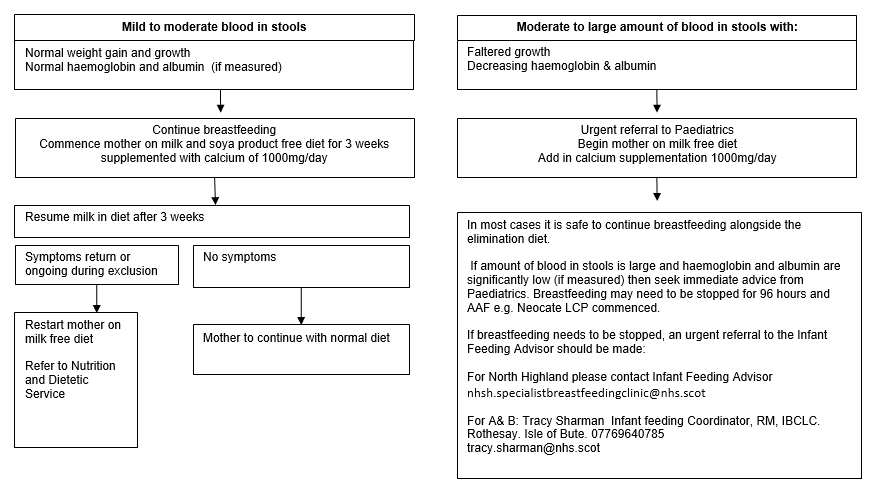 This is not an allergic reaction and can arise as a result of an inherited deficiency in lactase, the enzyme needed to digest lactose, which is the carbohydrate found in all mammalian milk.  This is extremely uncommon in the UK.

May occur post gastroenteritis as a result of severe diarrhoea, this is usually transient and should resolve without action within a few weeks.  It may also occur secondary to the ongoing gastrointestinal symptoms resulting from undiagnosed CMPA. Symptoms should resolve following appropriate treatment of cows' milk protein allergy.

*Nutramigen LGG 1+2 contain the probiotic Lactobicillus GG and therefore should not be fed to premature infants (until they have reached their estimated date of delivery) or infants who might have immune problems.

Gastrointestinal symptoms associated with CMPA can cause secondary lactose intolerance. To reduce the risk of misdiagnosis during the exclusion and challenge process an alternative formula which is also lactose free should be prescribed in those infants presenting with gastrointestinal symptoms.  Lactose containing formula can be used for the treatment of cows' milk allergy, following confirmation of diagnosis or if there is poor palatability of initially prescribed formula.

Soya formula should not be used in infants under 6 months but can be used in an infant over 6 months if EHF are not accepted due to poor palatability. Soya infant formula is available for purchase from a retail outlet therefore, if soya formula is required, it does not require prescription.

All prescriptions for alternative formulas should be prescribed as an acute prescription. Approximately 10 tins will be required per 4 weeks. Prescription should continue until 12 months of age minimum and ongoing if deemed necessary under dietetic review.

Soya, and other formula and milk substitutes

This is no longer on the Formulary and should not be prescribed.

Soya infant formula should not be used first line in the diagnosis and treatment of cows' milk protein allergy as, dependent on presenting symptoms, there may be up to a 50% chance that infants will also react to soya formula. 10

Soya formula should not be used routinely in infants aged 0 to 6 months as it contains phytoestrogens that could pose a risk to long term reproductive health. 11, 12 A recent systematic review and meta-analysis found no significant effect on reproduction function 13 however currently, recommendations remain unchanged in that it is not suitable for under 6 months of age except for:

Other formula and milk substitutes

Goat or other mammalian milk formulas are not suitable for the treatment of Non-IgE CMPA as protein structures are similar to cow’s milk and there is a high risk of cross reaction.

Supermarket soya, oat or nut milks are not nutritionally complete and should not be used as a milk substitute for infants under 12 months. In most cases, following dietetic review, they can be used as the main drink after 12 months.

Rice milk should not be used in children under 4.5 years due to unacceptable levels of naturally occurring arsenic, relative to body weight.

Alternative formula smell and taste significantly differently from breast milk or standard infant formula. To ensure acceptability, infants should transition from their existing formula to the alternative formula following the guidance below, altering total volume to mirror usual intake:

This advice is for infants with Non-IgE mediated food allergy only (i.e. delayed reaction with mild to moderate symptoms which occur 2 hours to 2 days after ingestion of cows' milk).

Cows' milk must be reintroduced in order to confirm diagnosis. This should be done gradually over several days using the steps below. If your baby shows any sign of return of their symptoms of cows' milk allergy at any time during challenge do not proceed with the next step. Return to using the alternative formula and milk free diet. Inform your GP or Health Visitor and they will refer you to a Dietitian. The Dietitian will arrange to see you and your child to monitor your child’s growth and ensure your child’s diet is adequate for their needs while they are excluding cows' milk.

The volumes above are just an example but are useful to show the correct ratio of cows' milk to alternative formula for the challenge period.  Allow your baby to feed to appetite, if they are having 7oz, start with 1oz cows' milk formula added to 6oz alternative, the challenge will take a little longer to complete.

Cows' milk should be gradually reintroduced to mother's diet over a period of 1 week.

Hydrolysed formula and soya-based formulas contain alternative sugars, which can cause tooth decay. Once the deciduous teeth start to erupt, they should be brushed twice daily with a small, soft toothbrush and a smear of fluoride toothpaste

The National Children and Young peoples allergy Network CYANS has produced a number of useful patient resources that can be accessed and printed for use via the link below:

Approved By: TAM Subgroup of ADTC